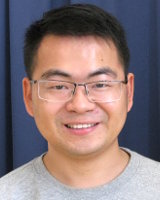 Studying for Doctor of Philosophy

Slow slip events (SSEs), a type of slow earthquakes, have been detected along several subduction zones worldwide through various geodetic measurements such as Global Positioning System (GPS), tiltmeters and strainmeters, with duration ranging from days to years, which is much longer than ordinary earthquakes of comparable seismic moment. SSEs have come to be treated as playing an important role in releasing strain in subduction zones, and we may be able to infer from their occurrence pattern the probability of triggering a damaging earthquake within the nearby velocity weakening portion of the plate interface. However, the underlying geophysical mechanisms governing SSEs are still not well understood. My PhD research mainly consists of developing mathematical and statistical models to describe how SSEs evolve with certain parameters at the interface plate, and to determine how slip characteristics affect the geodetic signals received in the earth surface. I will then focus on building up the corresponding SSEs inversion model to estimate the slip parameters such as slip and slip rate from the knowledge of geodetic data.